Now They Can’t Give It Away

Today oil went negative. Yes-Chevron and ExxonMobil will pay to have someone take their product.

This is absolutely terrifying. Oil and gas workers are being laid off in droves and there is nowhere to land.

This downturn in the market is going to last a long while, folks. If you are in oil and gas, or are affected by it, batten down the hatches. It will be very ugly for the next 12-18 months.
C

Justin T. said:
Today oil went negative. Yes-Chevron and ExxonMobil will pay to have someone take their product.
Click to expand...

Yes and no. Yes the price went negative, no to the majors having to pay someone to take their oil.

What happened today was a pricing anomaly associated with the expiration of the near term futures contract for May delivery. There were many speculators, traders and others who were caught with long contracts that they couldn't get out of at reasonable prices earlier so they waited and gambled on today and lost big time.

These folks don't have the ability to actually take physical delivery of the oil underlying the contracts that they owned, so they had to sell at ANY price in order to get flat. The smart traders saw this coming and there was a virtual dearth of bids as everyone waited for the carnage to work itself out. There probably were hedge funds that went belly up and traders bankrupted today because they played this wrong.

What will be seen in the next day or so is the the "price of oil" will be "back up" in the 20 dollar range. That's because the June and July contracts are trading in that range. Now they may very well continue trending lower into the teens based on the price action today, but the folks trading those contracts will have the benefit of today's action to reposition those forward trades in advance of the expiration of those contracts.

But, storage is the big problem right now. The gov wanted to purchase some of the cheap oil for the Strategic Oil Reserve and to help support the near term price, but the Dems in Congress refused to allow this and it was stripped out of the recent stimulus bills. However, Trump is talking about "leasing" space in the SPR to producers who are still over-producing.

Why are they still over-producing? Because they aren't selling oil at negative dollars or even in the twenties. Much of what is being produced right now is actually being sold at much higher prices because the producers contracted that production months ago. And because you can't just shut in a well by turning a faucet. There are processes that must be followed for wells to be shut safely and economically. It takes time.

Also, there is much talk in the news about tankers from other countries headed this way and shouldn't we refuse them as we already have too much US produced oil? Two things... That oil was contracted months ago. Breaking those contracts would present legal issues. Second, there are many grades and types of oil. Even though we have overproduction here, there are some grades and weights of oil that AREN'T produced here. The refineries need these heavier oils from abroad to blend with the lighter weight oils produced here in order to produce the entire range of refined products that are required.

Thanks for the writeup. I know it’s being written about as an anomoly and not a big deal, but it is. I’ve been in O&G for about 15 years and I can tell you that the barrel price absolutely drives how majors do business. It does not matter which contract you look at. For now, they will all be like this globally (not just here at home). Most of what you wrote is true, and the process will repeat in June at last possible moment. Will for some time until capacity is relieved. The Chinese are actually propping the market up a bit by continuing buy operations. And as a member of the O&G community I understand it still boils down to the fact that the majors are not spending money on capital projects or much else anytime soon-it will be a bloodbath in my industry.
Last edited: Apr 20, 2020
C

Justin T. said:
Thanks for the writeup. I know it’s being written about as an anomoly and not a big deal, but it is.
Click to expand...

Yeah, I didn't mean to imply that it isn't a big deal, because it certainly is. And the long term pricing issues related to oversupply and storage are VERY real and will be a problem going forward for some time. Production is slowing and will continue to slow as the delivery under the higher priced contracts rolls off and wells are shut in. That will help, but it will take time.


Justin T. said:
...I understand it still boils down to the fact that the majors are not spending money on capital projects or much else anytime soon-it will be a bloodbath in my industry.
Click to expand...

Yes. Most of the majors will make it through to the other side, but it will be a bloodbath for the smaller firms and the independents. And for the employees of any size of company, it will also be very difficult. I hope you will be okay.
E

@climbnjump Thank you, that was excellent.

I'd tell you that you should write market analysis for the WSJ, but I wouldn't want to insult you by calling you journalist.
C

As they say, a picture is worth a 1000 words, so here's a graph of the futures contract in question yesterday. You can see the close yesterday was about negative $37. Today was the final day of trade for the contract and although it opened still in negative territory, it traded back up into the positive range to close at about $10.

The contract started trading over a year ago, but the graph below only shows price action starting this year and you can see it was trading over $50 until about the middle of February.

It ain't pretty, but it is history...

The front month contract is now the June contract and that one took a dump today also. It closed yesterday just over $20 but closed today at about $11.57. Contracts further out in the Fall time frame are still trading in the 20's and 30's.

If Congress decides to act and approves money for purchasing oil to put into the Strategic Petroleum Reserve, that could provide some relief on the storage side. But production needs to start dropping off soon also. On the demand side, if the country starts to open back up, that would also help, but not a lot at first. Demand is going to be weak for a long time after that. 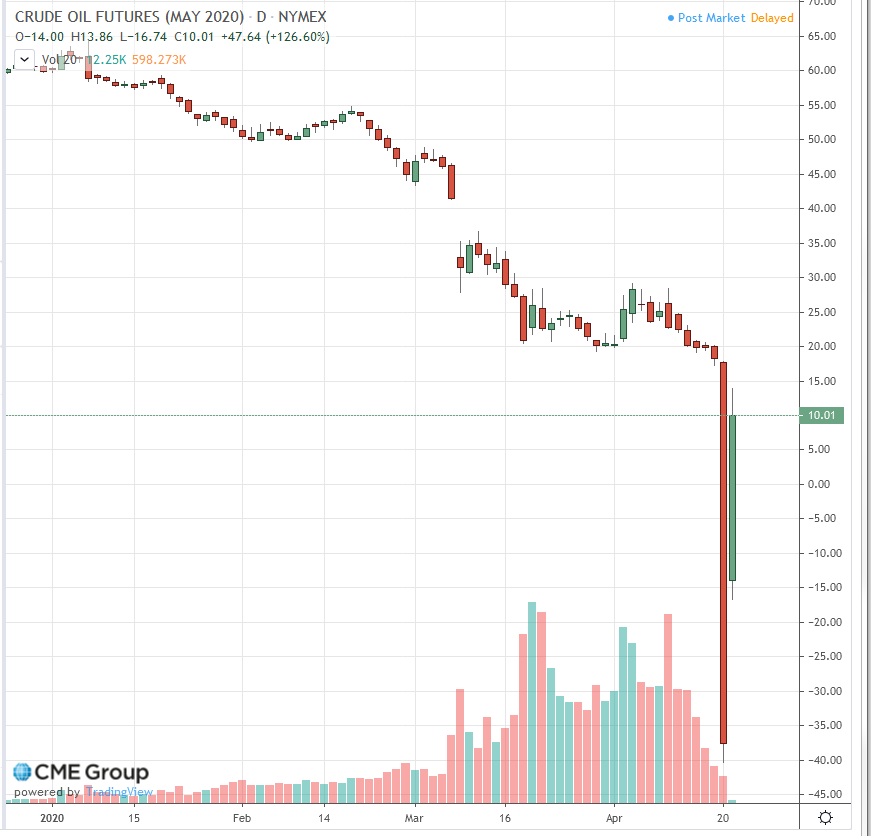 Yes. Recovery on all fronts will not happen for some time. I don’t think we’ll be whole again for another year or more.

Excellent write up, climbnjump. Is any of this unprecedented behavior attributable to the IMO2020 regulation?

Regarding the strategic reserves, my understanding is that existing storage is nearly full. If so, where else can this oil be put? I know salt domes in the Gulf Coast are great for this, but they are not currently developed for use.

Also many, many O&G support businesses are and will continue to be negatively impacted. Some are still currently working fulfilling prior contracts, but there are no new contracts in the pipeline.

climbnjump said:
Most of the majors will make it through to the other side, but it will be a bloodbath for the smaller firms and the independents. And for the employees of any size of company, it will also be very difficult.
Click to expand...

sparkyv said:
Is any of this unprecedented behavior attributable to the IMO2020 regulation?
Click to expand...

No, those regs were finalized back in 2016 and didn't go into effect until Jan 1 this year. So both the shippers and refiners had 4 years to adjust and they made good use of the time.


sparkyv said:
Regarding the strategic reserves, my understanding is that existing storage is nearly full.
Click to expand...

Yeah, I don't now what the status is. I haven't been able to find good numbers.


sparkyv said:
I know salt domes in the Gulf Coast are great for this, but they are not currently developed for use.
Click to expand...

Actually, some of them have been - that's where the SPR oil currently is stored:

I remember "back in the day" filling up the tank on my '67 Mustang was rarely as much as six bucks. For many years in the recent decades, that was only a nice memory.

However, I paid $1.15/gallon the other day and that got me thinking about what that would be adjusted for inflation back to when I still had the Mustang in 1976. So, I went to the BLS inflation calculator and plugged $1.15 into the way back machine and it came up with - wait for it - $.25. That's quite a bit below the average price in '76 of about $.56/gallon.

But actually, as everyone knows, there are Federal and State taxes added to the cost of gasoline. In my case the other day, those amounted to $.47 of the $1.15. So the gasoline itself was only $.68/gallon. Plugging that into the inflation calculator gave $.15.

Now, if I just had someplace to drive to...
C

Well, what a difference a month makes. It was one month ago today where the expiring oil futures contract traded as low as negative 40 bucks. Today, the expiring contract closed at about 32 bucks - see the chart below. (It still trades tomorrow - the actual date of expiration.)

Oversupply issues and lack of storage are still problems, but with the states here starting to open back up and countries overseas starting to do the same, the demand situation is starting to improve. And the negative prices last month scared the producers enough to motivate them to accelerate shutting in wells and reducing drilling in order to limit supply.

And apparently, some storage was "magically found" when near term contracts were trading around 10 bucks and long months (later this year) trading in the 30's. So if you could find a place to put it, you could buy short and sell long and triple your money (minus expenses, of course) in about six months.

However, the carnage in the oil industry will continue. Even though prices are improving - at least temporarily - it's not enough to overcome the earthquake that has taken place. 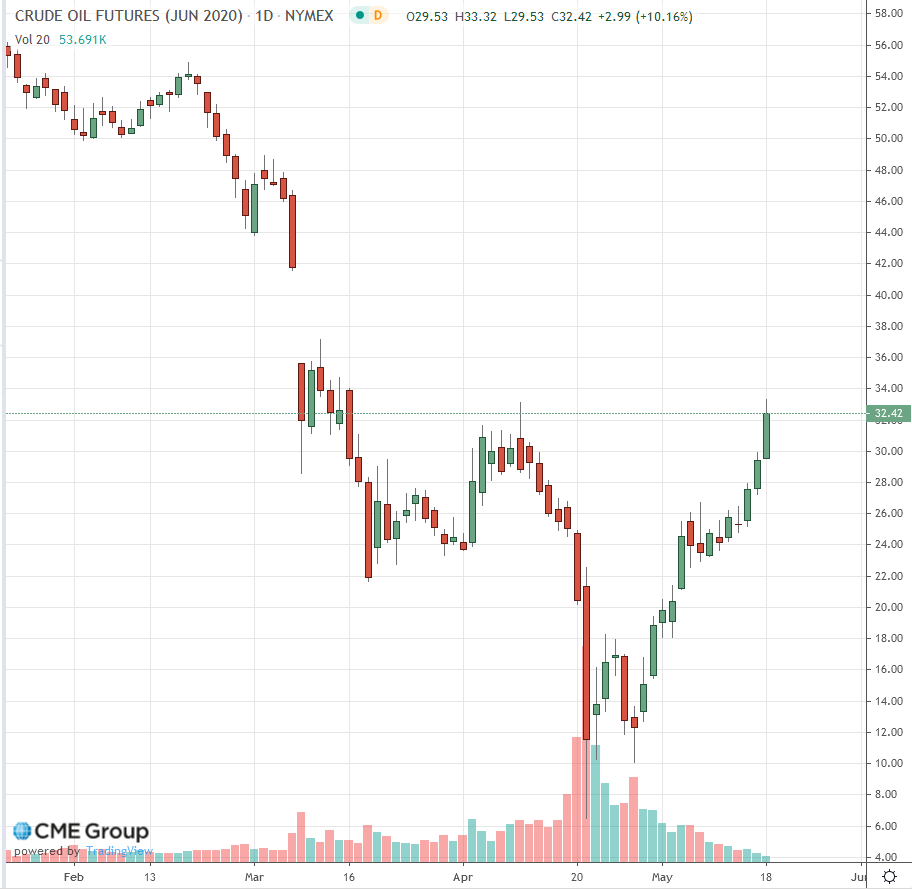